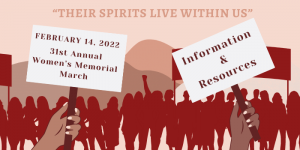 This blog brings attention explicitly to the MMIWG2S living in the Downtown Eastside and the 31ts Annual Women’s Memorial March.

For generations, we stand as Indigenous women, girls, and Two-Spirit people who have been fighting for, let’s be honest, our lives. In current years, the acknowledgment of murdered and missing Indigenous women has been acknowledged as a global issue. Indigenous Peoples and allies have come together, painting red on our hands, and placing the paint across our lips, to represent our relatives’ silences and absent voices.

The Women’s Memorial March began in January 1992, after a woman was murdered on Powell Street. This catalyst event moved women to march on Valentine’s Day for those living in Vancouver’s Downtown Eastside (DTES), and the land of the Coast Salish peoples–Sḵwx̱wú7mesh (Squamish), Səl̓ílwətaʔ/Selilwitulh (Tsleil-Waututh) and xʷməθkʷəy̓əm (Musqueam) Nations. We carry this knowledge and continue marching to honour the lives of Missing and Murdered Indigenous Women, Girls, Two-Spirit people and survivors of gender- and race-based violence.

At the UBC Longhouse:

February 14th –
9:00 am – coffee and snacks
10:00 am – smudging and drumming
11:00 am – bus departs for march from the Longhouse
12:00 to 4:00 pm – programming will continue at the Longhouse for those not attending in person including wellness activities, beading and more

Supports from SVPRO and Counseling will be available at the Longhouse all day.

If you have any questions or concerns, you can get in touch via lauren.casey@ubc.ca.

*All students, staff and faculty should register. There will be some last minute spots available on the day of however we request that you register in advance if possible. 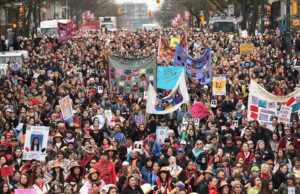 KNOW THE PROTOCOL: In a good way, we want to inform everyone about the protocol of the march that has been in place for three decades: 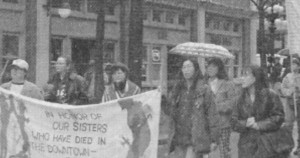 Image from the Survival, Strength, Sisterhood: Power of Women in the Downtown Eastside Vimeo video.

“Survival, Strength, Sisterhood: Power of Women in the Downtown Eastside” by Alejandro Zuluaga and Harsha Walia: a short film that documents the 20-year history of the annual women’s memorial march for missing and murdered women in Vancouver, Coast Salish Territories. By focusing on the voices of women who live, love, and work in the Downtown Eastside this film debunks the sensationalism surrounding a neighbourhood deeply misunderstood and celebrates the complex and diverse realities of women organizing for justice. (32 mins) 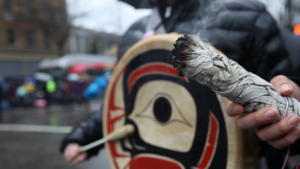 Screenshot from the film At Women’s March, Hope and Heartache as National Inquiry Begins

“In order to achieve justice, you have to feel injustices”

“At Women’s March, Hope and Heartache as National Inquiry Begins” Captures the 26th Women’s March. In this film, Indigenous people share their thoughts and hopes for the national inquiry into missing and murdered indigenous women at the annual Downtown Eastside Women’s Memorial March in Vancouver, Feb.14, 2016. 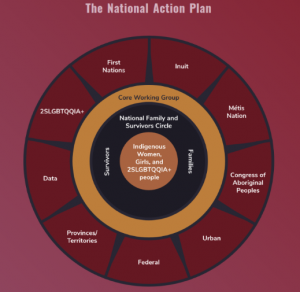 Screenshot from the National Action Plan.

The National Action Plan honours, and is inclusive of, all Indigenous women, girls, and Two Spirit, Lesbian, Gay, Bisexual, Transgender, Queer, Questioning, Intersex, and Asexual Plus (2SLGBTQQIA+) people. We are unique and distinct in our identities, ancestries, histories, and traditions and we acknowledge the importance of recognizing these differences. 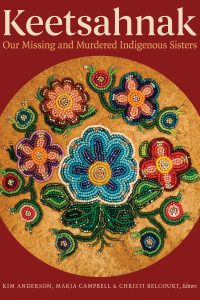 “Keetsahnak / Our Missing and Murdered Indigenous Sisters” (Chapter 1) edited by Kim Anderson, Maria Campbell and Christi Belcourt: In Keetsahnak / Our Murdered and Missing Indigenous Sisters, the tension between personal, political, and public action is brought home starkly as the contributors look at the roots of violence and how it diminishes life for all. Together, they create a model for anti-violence work from an Indigenous perspective. They acknowledge the destruction wrought by colonial violence, and also look at controversial topics such as lateral violence, challenges in working with “tradition,” and problematic notions involved in “helping.” Through stories of resilience, resistance, and activism, the editors give voice to powerful personal testimony and allow for the creation of knowledge. This book is available online or physically from X̱wi7x̱wa Library.