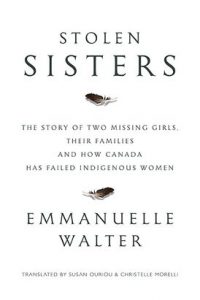 In 2014, the nation was rocked by the brutal violence against young Aboriginal women Loretta Saunders, Tina Fontaine and Rinelle Harper. But tragically, they were not the only Aboriginal women to suffer that year. In fact, an official report revealed that since 1980, 1,200 Canadian Aboriginal women have been murdered or have gone missing. This alarming official figure reveals a national tragedy and the systemic failure of law enforcement and of all levels of government to address the issue.

Journalist Emmanuelle Walter spent two years investigating this crisis and has crafted a moving representative account of the disappearance of two young women, Maisy Odjick and Shannon Alexander, teenagers from western Quebec, who have been missing since September 2008. Via personal testimonies, interviews, press clippings and official documents, Walter pieces together the disappearance and loss of these two young lives, revealing these young women to us through the voices of family members and witnesses. 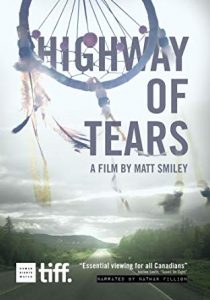 Highway of Tears‘ is about the missing or murdered women along a 724 kilometer stretch of highway in northern British Columbia. None of the 18 cold-cases since the 1960’s had been solved, until project E-Pana (a special division of the RCMP) managed to link DNA to Portland drifter, Bobby Jack Fowler with the 1974 murder of 16 year-old hitchhiker, Colleen MacMillen. In Canada, over 600 Aboriginal women have been reported missing or been murdered since the 1960s. Viewers will discover what the effects of generational poverty, residential schools, systemic violence, and high unemployment rates have done to First Nations reserves and how they tie in with the missing and murdered women in the Highway of Tearscases. Aboriginal women are considered abject victims of violence. Now find out what First Nations leaders are doing to try and swing the pendulum in the other direction.

Living at the intersection of multiple identities in the United States can be dangerous. This is especially true for Native women who live on the more than 56 million acres that comprise America’s Indian country – the legal term for American Indian reservations and other land held in trust for Native people. Today, due to a complicated system of criminal jurisdiction, non-Native Americans can commit crimes against American Indians in much of Indian country with virtual impunity. This has created what some call a modern day ‘hunting ground’ in which Native women are specifically targeted by non-Native men for sexual violence. In this urgent and timely book, author Amy L. Casselman exposes the shameful truth of how the American government has systematically divested Native nations of the basic right to protect the people in their own communities. A problem over 200 years in the making, Casselman highlights race and gender in federal law to challenge the argument that violence against Native women in Indian country is simply collateral damage from a complex but necessary legal structure. Instead, she demonstrates that what’s happening in Indiancountry is part of a violent colonial legacy – one that has always relied on legal and sexual violence to disempower Native communities as a whole. Injustice in Indian Country tells the story of American colonization through the eyes of Native women as they fight for justice. In doing so, it makes critical contributions to the fields of American law and policy, social justice and activism, women’s studies, ethnic studies, American Indian studies, and sociology. 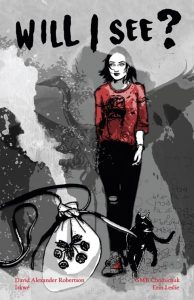 May, a young teenage girl, traverses the city streets, finding keepsakes in different places along her journey. When May and her kookum make these keepsakes into a necklace, it opens a world of danger and fantasy. While May fights against a terrible reality, she learns that there is strength in the spirit of those that have passed. But will that strength be able to save her? A story of tragedy and beauty, Will I See illuminates the issue of missing and murdered Indigenous women. Based on the story by Iskwé and Erin Leslie. 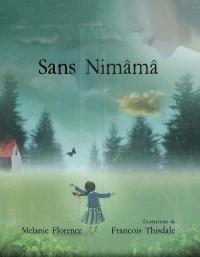 A young mother, one of the many missing indigenous women, watches over her small daughter as she grows up without her nimama. Together, but separated, they experience important milestones: the first day of school, first dance, first date, a wedding, and new life. A free-verse story of love, loss, and acceptance told in alternating voices, Missing Nimama shows the human side of a national tragedy. An afterword by the author provides a simple, age-appropriate context for young readers. 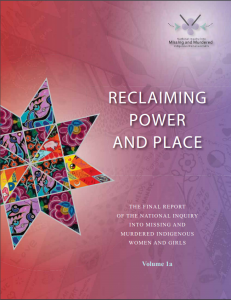 The National Inquiry’s Final Report reveals that persistent and deliberate human and Indigenous rights violations and abuses are the root cause behind Canada’s staggering rates of violence against Indigenous women, girls and 2SLGBTQQIA people. The two volume report calls for transformative legal and social changes to resolve the crisis that has devastated Indigenous communities across the country.
The Final Report is comprised of the truths of more than 2,380 family members, survivors of violence, experts and Knowledge Keepers shared over two years of cross-country public hearings and evidence gathering. It delivers 231 individual Calls for Justice directed at governments, institutions, social service providers, industries and all Canadians.
As documented in the Final Report, testimony from family members and survivors of violence spoke about a surrounding context marked by multigenerational and intergenerational trauma and marginalization in the form of poverty, insecure housing or homelessness and barriers to education, employment, health care and cultural support. Experts and Knowledge Keepers spoke to specific colonial and patriarchal policies that displaced women from their traditional roles in communities and governance and diminished their status in society, leaving them vulnerable to violence.

Upcoming: we are currently developing a MMIWG research guide

Xwi7xwa would like to thank Andrea Groban-Oakunsheyld for allowing us to use their image in this spotlight series.

Xwi7xwa would like to thank Elena Pederson, Publications & Web Services Assistant, from UBC Education Library for her work on designing our digital signage.