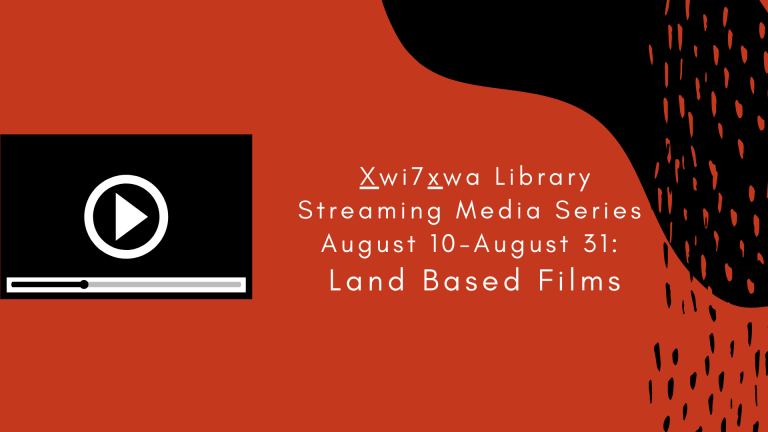 Relationship to the land and traditional territory is often intertwined with government, activism, storytelling, spirituality, art, ceremony, traditional knowledge and other Indigenous cultural expressions. Here are 15 streaming videos that explore the connections between land, place and Indigeneity. Watch these streaming videos any time on McIntyre Media through UBC Library’s catalogue.

cə̓snaʔəm, the city before the city: Directed by Elle-Máijá Tailfeathers, cə̓snaʔəm, the city before the city commemorates five years since the resolution of a dramatic and compelling moment in the history of this place now known as Metro Vancouver. In late 2011, the Musqueam First Nation learned that a 108-unit condo development was being planned at one of their ancestral village sites without prior consultation with the nation. Not long after discovering the news of the planned condo development, Musqueam learned that ancestral remains were unearthed during an archeological “investigation” prior to development. 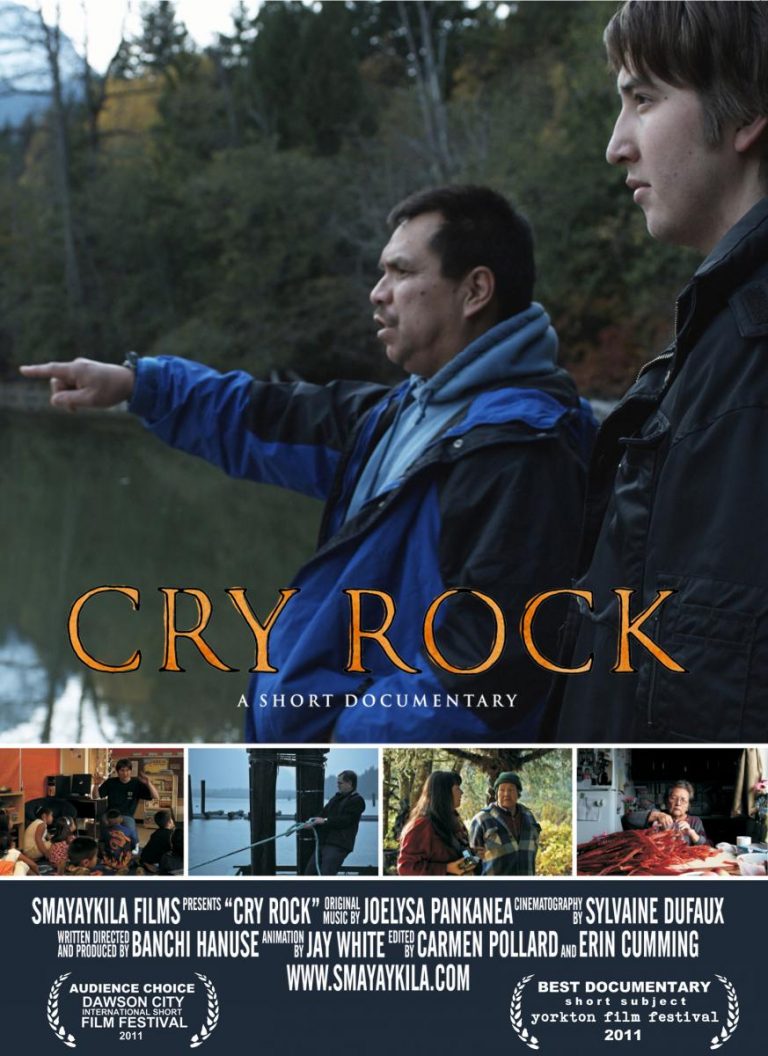 Cry Rock: The wild beauty of the Bella Coola Valley blends with vivid watercolor animation illuminating the role of the Nuxalk oral tradition and the intersection of story, place and culture. In English and Nuxalk.

Colonization Road: Since Europeans arrived on these shores, roads have been built to bring settlers across the country, connect them with resources to create industry and ultimately to establish a nation. Many of these interconnecting networks are called Colonization Roads. For Indigenous peoples, these roads embody a powerful and ironic reality; colonization is still so powerful, we name our roads after it. Join Anishinaabe comedian, Ryan McMahon as he travels across Ontario learning about Colonization Roads, the ways in which they have dispossessed Indigenous people of land and access to traditional territories while creating space for settlers in the colonial experiment that has become Canada.

Dehcho Ndehe Gha Nadaotsethe “Fighting for Our Land”: Dehcho Ndehe Gha Nadaotsethe “Fighting for Our Land” tells the history of the land, people and culture of Denendeh from pre-contact up to the present. In the video, our history is spoken by many different voices from all of the communities in the Dehcho, This community based video was initiated by the Dehcho First Nations and produced and directed by Rebecca Garrett. The goal of the project was to inform and educate, and to promote unity within Dehcho First Nations communities.

Estuary: Estuary is a compositional work by Tyler Hagan (Métis) shot on super 16mm that takes the viewer into a pensive cinematic state where they are allowed to view a familiar environment – a river landscape – in a completely new way. Shot at the mouth of the Fraser River, in Steveston, B.C., Canada. 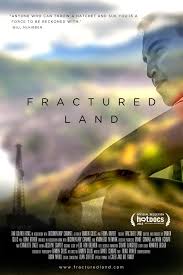 Fractured Land: With some of the world’s largest fracking operations on his territory, a young Indigenous leader and lawyer confronts the fractures within his community and himself as he struggles to reconcile traditional teachings with the law to protect the land.

How A People Live: Documentary of the Gwa’sala-‘Nakwaxda’xw Nation, which the Canadian government forcibly relocated from its traditional territories on the coast of British Columbia in 1964.

In the Similkameen: In the Similkameen is a short experimental film which interrogates ideas of landscape and place by placing the viewer in the position to engage with the experience of being. Set on the Lower Similkameen Indian Reserve lands in the Southern Okanagan, the central conflict of the work subtly exists between the ‘natural’ landscape and ‘man-made’ incursions–namely a turn of the 20th Century missionary chapel, St. Ann’s. While the church and its relationship to its surroundings represent the larger history of conflict between the smelqmix people of the syilx (Okanagan) nation and Canadian settlers, In the Similkameen focuses on the visceral impact that it has as a part of the landscape. As Upper Similkameen Elder Ramona Allison related to me what her father had told her as a child, “We used to pray under the trees. Then the white man came, cut ’em all down, and now we pray in the trees.” This perspective reminds us that the dichotomy of ‘natural’ and ‘man-made’ is a construct of western thought, and encourages us to think, and experience our world as whole–as an ecosystem. In the Similkameen is the expression of attempting to embody such a perspective. It is an invitation to look, to listen, and to reflect.

‘Namegan’s om dłu’wans awinagwisex = We are one with the land: Namgis Nation has traditionally lived in the ‘Namgis Valley on the shores of Gwa”ni River, Vancouver Island. In 1997 ‘Namgis Nation have signed a statement of intent to negotiate a modern-day treaty with the federal and provincial governments. This process will provide them with a platform to gain access and control over their land and resources to become a self governing Nation. This film highlights their journey to their land in the summer of 2009.

The Oldest Tree In The World: Interweaving Leanne Simpson’s poetics, song, and stories of the land, while honouring the oldest maple tree in this region of Michi Saagiig Nishnaabeg Territory, “The Oldest Tree in the World” is a love song to the oldest sugar maple in the region, living just outside of Nogojiwanong (Peterborough) in Mark S. Burnham Provincial Park. This grandmother tree, one of our oldest living relations, has lived through over 500 years of history.

On The Line: The Northern Gateway Pipeline Project is a proposal by Calgary’s Enbridge Corporation to construct a 1,170 km oil pipeline from Bruderheim, Alberta to Kitimat, B.C. The pipeline would cross 773 watercourses and bring supertankers to B.C.’s pristine north coast for the first time ever in order to deliver tar sands bitumen to Asian markets. In the summer of 2010, filmaker Frank Wolf and his friend Todd McGowan biked, hiked, rafted and kayaked the GPS track of the pipeline in order to uncover the truth about the proposal. Through the voices of people they meet along the way, their rough and tumble journey reveals the severe risk and consequences associated with this 5.5 billion dollar mega-project

St’at’imchalh: Spirit of the People: The caretakers of the land! Rich with cultural and scenic pictures this beautiful film explores the strength and history of First Nations and how they have managed the land, for thousands of years, as their “garden”. Thru personal interviews and precious archival footage we are delighted to meet the keepers of the garden.

The Fast: The Fast follows Doreen Manuel into the Rocky Mountains for a 4-day no food or water fasting ceremony in search of storyteller power. Doreen has worked for over 20-years to develop the story about her father George Manuel, an Indigenous leader whose leadership and vision could inspire this generation to take Indigenous people into the Fourth World. The stakes are high, the story needs to be told, but Doreen is stuck and unable to tell the story. Listening to the voices of her ancestors, Doreen is guided to the same sacred site where her father participated in ceremony, so that she may start at the beginning. Out of this journey, she discovers the answer is simple but the path is difficult and she lays the spiritual groundwork for her next journey as a filmmaker. – from runninwolf.ca

This Place Is Part Of Our Spirit: Elders and Knowledge keepers share their views on current Archaeology practices. Curve Lake First Nation in Central Ontario are the stewards of the Peterborough Petroglyphs which has been a special spiritual place since time immemorial.

Tu Suhudinh: It’s 2008. Water is the most precious commodity on Earth. A powerful corporation controls most of the resources and is trying to control more. Directed by Helen Haig-Brown.